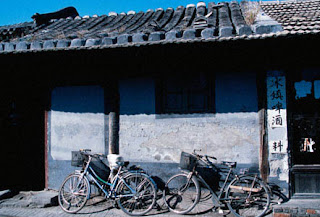 The frenzied construction in the run up to the Beijing Summer Olympics is changing the landscape of the city. The result is the casualty of many hutongs, which are being torn down and replaced by large modern developments.

Hutongs are ancient alleyways lined by siheyuan, traditional walled courtyard homes. A part of the ancient architectural fabric that weaves Beijing together, these neighborhoods are tight knit communities—small villages within an urban setting. Many date back to the Qing dynasty sporting traditional tiled roofs while others are one-story concrete blocks built after WW II.

Walking through and getting lost in them is to step back in time. Enter one and the pace of this massive city slows down. Residents sit outside sharing gossip. Old men gather with their beloved birds in bamboo cages. Street vendors sell food. The clacking sound of a mahjong game and food vendors and garbage collectors calling out are common.

You can take a formal tour of hutongs. A popular way is via cycle rickshaws. You’ll find many drivers along Houhai Lake with its trendy bars and cafes. I suggest taking a short rickshaw ride to get your bearings followed by walking around on your own. 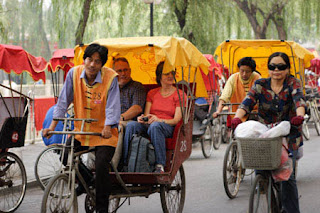 Another large hutong can be found across the street from the Lama Temple. It is less touristy.

If you want a more full on experience there is accommodation in these neighborhoods. In some hutongs homes have been converted into hotels and hostels.

Tearing these communities down and replacing them with modern high-rises is controversial. While the government protects some as historical relics many do not have indoor plumbing. Residents share crowded public toilets and showers. In recent years the more posh siheyuan have been bought by the wealthy and renovated into opulent gated compounds entered through large red doors.

It's a shame, the same thing is happening in Istanbul.

Many of the old neighborhoods that were sanctuaries for those who needed a place to settle (Roma, Jewish, etc.) are being changed, moved or replaced with modern structures.

Of course this makes things more expensive and creates other problems as well...

Hi Foxnomad,
It seems that gentrification is happening world-wide with consequences. I was in Istanbul about 9 years ago. It must have changed quite a bit in the last decade.

I have some video somewhere _ need to dig it out - where I am filmed after offering to help mix mortar in the reconstruction of one of the Beijing hutongs. The old workers were pretty amused by my efforts but all that experience over the years of feeding cement mixers came in handy - though this was the first time I ever mixed horse hair with the cement. be encouraged - this was a repair and reconstruction, not a tearing down.

I saw something on TV the other day about these type of Hutongs... it would be such a shame to let them go by the way side... they were saying they are doing 'tours' of these... I think is more wiser... the money made from the tours could go back into keeping up the Hutongs... pity people get rid of the buildings that have such character... for the sake of progress... there is such a thing I think of TO MUCH progress... take care and thanks for this post...

Hi Fliss and Mike Adventures,
would love to know which program you saw. Hutongs are in the spotlight a lot as of late because of the 2008 Summer Olympics in Beijing. Thanks for stopping by.

All Images and Content © 2007-2015. Images and content on Escape From New York are protected by copyright laws and may not be reproduced, copied or used in any way.